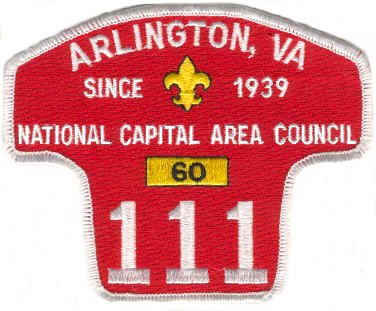 We are often asked about our unique shoulder patch, and how other Troops might get something similar. Happy to oblige! First, some background on the patch itself, then some information on how you could get one for your Troop.

Prior to the 1970’s, most Scout Troops did not use Council Shoulder Patches (aka: CSP’s) on their uniforms; rather, they wore a two piece combination of their home town and state in an “over/under” arrangement. The patches themselves were red with white lettering and trim. Just below the state strip, qualifying Troops could also put in a silver or gold strip, representing 25 or 50 years of continuous registration in the BSA. Finally, the Troop number (one to three numerals) was placed just below the tenure (or state) strip. Although you could use the CSP in place of the home town/state combination, not many Troops did so; most of the CSP’s were also just white lettering and trim on a red background, and most Scouts preferred a closer name association with their home town.

In the 1970’s, however, this all changed. With the advent of a new Boy Scout advancement program in 1972 came a new uniform and new CSP’s. The CSP’s were dramatically different – usually well designed and quite colorful, and unique for each council. They were an instant hit, and – with “Official BSA” encouragement, many Troops (including 111) switched from their home town/state combinations to CSP’s. However, other Troops continued with the traditional “red and whites.”

From 1987 through 1990, Troop 111 participated in four straight National High Adventure Programs – the Adirondacks Canoe Program, Maine Canoe Base (Matagamon), Philmont and the Florida Sea Base. Scouts in the Troops were often asked where we were from; to which answers to the effect that we were from the National Capital Area Council usually generated secondary comments like: “I can already see that – but where are you from?” Several of the Scouts that attended Philmont in 1989 also noted other Scouts on the Council Contingent bus and at the Ranch itself with traditional “red and whites,” and began lobbying for our Troop to switch back to the old “Arlington, VA” combination. 1989 was also the Troop’s 50 anniversary, so everyone was also looking forward to moving up to the gold “50”-year tenure strips. However, several mothers balked at having to sew on 6 separate patches (in meticulous order) on all their sons’ uniforms! A hunt through the Troop archives revealed several old red and white “Arlington”‘s, “VA”‘s, and a single combination “111,” the latter of which would have saved two patches. However, when we laid the combination down on a tabletop for review, someone also (finally) made the suggestion: “Why don’t we combine all of them into one patch?” This was instantly approved, and we worked on a final design which also incorporated a gold colored fleur-de-lis and the Council name. After some experimentation, we decided against adding our sponsor’s name (St. Agnes Catholic Church) to the patch as “too crowded,” and instead bracketed “Since 1939” around the fleur-de-lis. Per suggestion by STADRI (the patch design company), we outlined the fleur-de-lis and the 50-year strip in black to get the final design. After some discussion, we went with a fully embroidered patch with an iron-on plastic backing; the iron-on backing is not a permanent treatment, but allows exact placement and secure fastening of the patch on the uniform prior to sewing. The design was an immediate hit, and is currently worn by all Troop members.

As noted above, the patch was fabricated by STADRI Emblem Company, Inc. (address and phone number below.) However, any patch company can duplicate the design. We order in two sizes; the full size version is 4 inches wide by 3 tall, and mimics the approximate size of a normal CSP, 50 year strip and set of Troop numerals. We also get a 90% sized version, which is perfect for new Scouts with smaller uniforms. For reference, the STADRI ordering numbers for our two patches are: Full Size: C1024AE; 90% Size: C1024AF. If you use STADRI, you’re welcome to reference these in discussing your Troop’s version. Prices vary according to how many you get, and whether you want full embroidery and iron-on backing. As a rough estimate, 200 of the full size would run about $1.90 from STADRI (1997 pricing), plus (minor) shipping and handling fees; you’ll notice that that’s considerably less expensive than even just a standard CSP from the Scout Shop – another unexpected bonus!

Final comments: (1) Although most folks love our patch designs (this and several others we also wear), a few decry our “illegal” patches. As with all the other “No-No” folks in Scouting, we just ignore them. Fair warning, however…. (2) Troop 111 has been ordering patches from STADRI for almost 8 years now; we have found them to be reasonably fast, and to do excellent work at very fair prices. However, we have no other association with them, and do not receive any benefit for including them on our Website; that is, this information is provided for your convenience only. As noted above, any patch design company can do equivalent work for reasonable prices. If you’d like to shop around, look in the back of “Boy’s Life” and “Scouting” magazines for other patch design companies; there’s at least a dozen.

This site uses Akismet to reduce spam. Learn how your comment data is processed.